fall over with shock - I've only gone and made a card!!!

Yes well it's not perfect and I've added to it since I made it last night, but at least I've made a start!  I've got more images printed out, so you never know you might see more cards.

Oh and I think I've worked out why my Mojo / inspiration / enthusiasm for making has been so absent.  A combination of colouring envy (have you seen the amazing colourers there are out in the blogworld?); knock to confidence (I applied for a few different DTs and got a knock back for all of 'em); not getting anywhere in any of the challenges I've entered this year (another knock to confidence) and finally not selling my cards (still more confidence knocking).

So I went off into a miserable spiral of feeling sorry for myself and thinking what crap my cards are, pathetic or what!

Anyway I think I've wallowed long enough, so I've given myself a good shake and am going to stop trying to compare myself to this, that or the other person.  So what if I'm no good at colouring, it's what makes me happy.  I'm on DT's and I've been on others - so my cards can't be that bad, can they?

I'm also going to make the effort to start blogging again - I have missed you all.

And here is the first card made with my resolutions in mind: 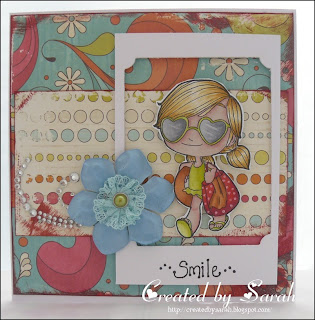 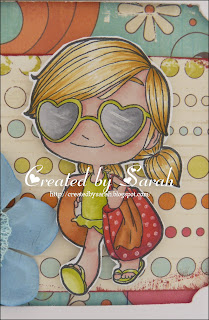 I'm off now to enter a challenge, or maybe two.

Oh, and no progress on the extension last week - no builder!  He's due here tomorrow for the next week though, so hopefully next week I'll have more pictures.

Email ThisBlogThis!Share to TwitterShare to FacebookShare to Pinterest
Labels: Some Odd Girl

dropped their Kindle in the sink?

That would just be me than - see when I moan about not getting any time to myself and I then get 30mins I probably shouldn't try and do the dishes and read at the same time then.

Kindle is now happily sitting in a bag with some rice, I'm going to go look at Amazon and see how much a new Kindle will be.
Posted by Unknown at 15:51 6 comments:

Ah yes, umm weekly updates - eh!  That didn't last for long did it - still there wasn't much actually going on with the building and nothing at all with the card making, so there didn't seem much point blogging.

I really truly am finding it so difficult to get back into crafting or blogging, I try and then I fail and then I try again. Maybe I'll just give up until school goes back in September, then try properly.

Still I thought I'd do a short post to show you what the builder has been up to over the last two weeks, we haven't seen that much of him as the weather hasn't been great and he's got other jobs to go to.  We also won't see him now until the back end of next week when, hopefully, the slates will go on, the doorway into the house will be knocked through and the windows will be in.  In short the building will be finished - then it'll be onto internal work.

Though that's not all our building works finished - have I said that we got the permission to create a new floor above our garages?  So that will become Peter's hobby room and the house extension will become Emily's bedroom.  So from October more building chaos! 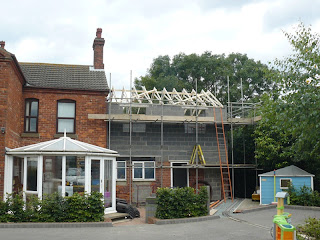 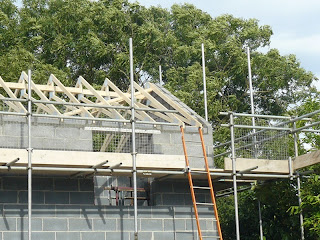 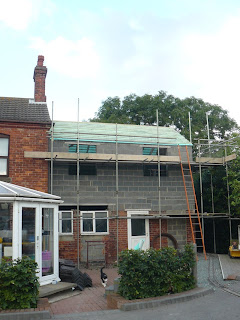 Peter says it looks like a little house all in it's own right - he thought if we blocked in the entrance from the kitchen into the new kitchen we could rent it out!!!

Ummm, nope!!!!!! I'm sooo looking forward to putting all of Emily's toys in her bedroom with her and getting our living room looking somewhat tidy again.

Strange how things change isn't it - Peter used to say, when Em was tiny, that he was looking forward to when she'd go play quietly in her bedroom and I'd say 'nope I'm not sending her into her room to play', now I'm like ' oh goodness Emily, please go play nice and quietly in your room for a bit and give mummy some peace'!  Does that make me a bad mother?  I do wonder sometimes if it does, but I also spend loads of time with her (she's never had a night away from me, we spend nearly every single day together, I drop her off and pick her up from school 90% of the time - she's also taken to sleeping badly again so it's a looong bedtime routine) so it is nice to be able to sit and appreciate the silence once in awhile.

See you in two weeks, probably.

Here I am with my weekly build update.

As I said in the previous post - a couple of hiccups along the way, but mostly things are going very well.

Here are the photos from this week....

Start of the week: 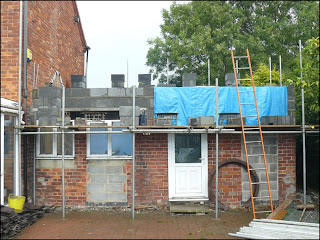 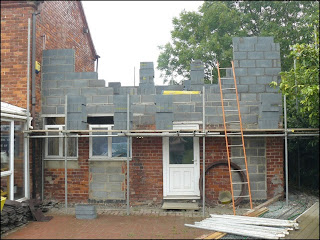 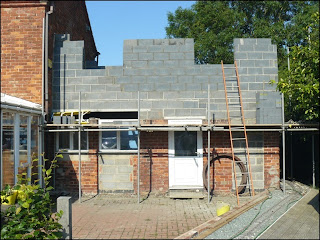 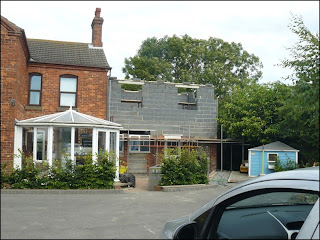 That pesky window and its lintel that the building regs man didn't like. 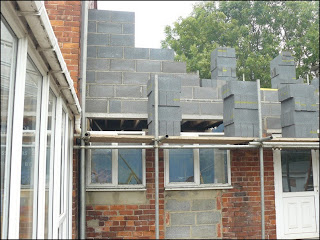 Problem is that I want a big window as this is going to be my kitchen, I want a good view looking over the garden so I asked for the two windows to be knocked into one.  It appears that a concrete lintel just doesn't cut it - we should've had a steel instead.  The building man says he told our previous builder who didn't pass that info on and ordered the wrong lintel.

Hopefully the problem is solved as this builder says when all is finished he will take out the row of blocks above the concrete lintel and put in the steel one instead.  I still get my big window and the building regs man is pleased.

I'll be back again next Sunday with my next update.  On the craft side I've almost coloured one image and so I might even have a card to show you all.

Hope everyone else is having a good week,

PS - I just wanted to say a huge congrats to my friend Susan who I've just seen has made the DT over at The Sugar Bowl.  Well deserved and I know she'll love being a Sweetie - as long as they don't make her use too much pink!!!
Posted by Unknown at 11:18 5 comments: