Two posts in one evening!

And another thing with blogger - why does it keep putting a blank line in when I'm typing my posts?  Its so annoying having to go back and delete the lines.
Anyway another first for me - two challenges in one post!  So I'll do what I've seen others doing - put a list (a whole two challenges!) at the bottom of post of the challenges I'm entering this card into. 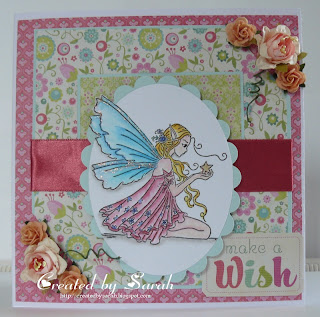 Detail shot to try and show the glitter on wings and star: 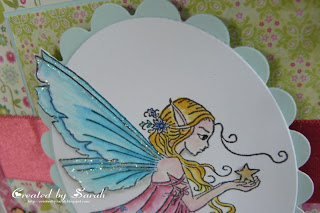 Lili of the Valley stamp - Garden of Wishes, coloured with Prisma pencils.  Die-cut with nesties.
Freebie paper stack My Minds Eye
Flowers from Joanna Sheen and Wild Orchid Crafts
Ribbon from my stuff

So now for the ramble - most of these rambles are about the little one, most of the stuff I do at the moment is all about her.  I spent 35 years of my life on me - so I suppose I can give the next 35 to her!  At the moment it's all about moving up into big school, I'm really hoping that she copes OK and that we've picked the right school for her.  It's so difficult to know what to do, we don't have many friends around here with children the same age (am getting more tho, from the groups I've been to) - so it went on a recommendation for the nursery from my friend with the little boy who is Ems best friend and had started at the nursery a few months before.  Em has been really happy in nursery and I'm so hoping that she stays as happy in the school.  I hated school, really hated it!  Was bullied something rotten and bunked off the last two periods on a Friday for the last year of school.  Not something I am particularly proud of, but it didn't do me much harm.  Was Physics after all and I'm not exactly a whizz when it comes to the sciences!

Anyhow, we were at our regular group this afternoon and this terms subject is moving up into big school, of course me being me - I tell the world everything - said that I hated school and am worried that Em won't like it.  The response was to hide that, as I don't want to pass on my hang-ups to her, now I know that - rationally I know that, but boy it's difficult.  I so hope she turns out like her dad - he knows what he wants and isn't afraid to go for it.  He isn't afraid to talk to people, or put his opinion forward, things which I find extremely difficult.  I think if you met me in real life, you'd think I was really stuck up - which I have been accused of - but it's really a case of severe shyness!  I can hide it quite well, but do have these serious wobbles when I'm alone.

I suppose this is something that all parents go through, one of the reasons I put off having children until later wasn't sure I could cope with the responsibility of it.  Seems so strange to put so many hopes and dreams into one little parcel who asks, quite innocently, do elephants lay eggs like chickens?  Or, is there another world in the sky, mummy?  Only so and so, went to Disney World and he had to go in the sky to get there!

Anyhow, it's getting late and I've rambled enough.

Hope you like the cards, and don't mind the ramble.

Email ThisBlogThis!Share to TwitterShare to FacebookShare to Pinterest
Labels: Lili of the Valley Fairies

Lovely card Sarah. The image is so pretty and the dp is yummy.

beautiful card sarah, i love the image and your pretty colours and details are stunning :D