I'm back, just!  I think I've waffled enough in other posts about our little holiday, daughters birthday and party - so no waffle now just card.

I had a sneaky look at last weeks LiM challenge and, to be honest, I am glad I was away!  A monogram on your card - I just wouldn't have been able to work that one out.  Well done to those of you who managed it - and with such flair as well.

Still a busy week here, made a cake yesterday which was delivered today for the school fair that my daughter's nursery is attached to and am off there shortly to help put the stalls out.  Then will go have a look around after Em comes out of nursery.

So this is just a flyer of a card to join in with the LiMettes - really didn't want to miss two weeks. 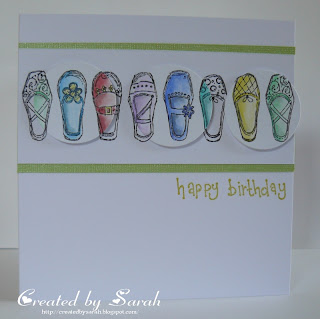 Trying to show the depth on the card: 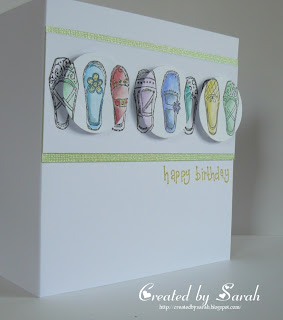 Struggled slightly with the sketch, until I had this idea.  I remember in one of the previous challenges someone had only coloured in a part of the stamp - spot colour I think someone called it?  I liked the idea and filed it away under inspiration, here it is being inspiration.  The placement of the circles could've been better, but I don't think they make an unusable card.

Details:
The Stamp Barn image, coloured with Primas.  The base image was left uncoloured and the coloured image was die cut out with Nesties, then 3d fixers to give a bit of dimension.  That's it really.

Sorry Mandi and Chrissie I haven't made it to your blogs this time, I know next week will be better and I'll be back into routine properly.

Best wishes all, I'm hoping the rain holds off here so that we aren't running from stall to stall in the rain!

See you next time

this is just fab! Hugs Juls

have a lovely afternoon.....hugs Vicky xx

Welcome back
Super idea and a great take on our sketch....very original
Thank you
Diva LIM
"Less is More"

Fabulous card Sarah,hope you have a lovely weekend.
Wendy xx

SO pleased you did';t miss two weeks too!
This is great!
Thanks so much
Chrissie
Lady LIM
"Less is More"

You clever thing Sarah - I LOVE this!!! I may have to steal, I mean borrow your idea!!!