So sorry I've been absent from the virtual world, have been busy in the real one!  Finally after 3 weeks of holidays we've been making the attempt to get out and about as a family and so we had a day out at Bressingham in Norfolk last Sat, then headed to the beach on Sunday.  Monday Emily and I met her best friend and his mum and went for a football lesson, yesterday we met up with some of the other children who are going to be starting Reception in September and then today we went to Crich Tramway Village.

Bressingham was OK, Peter used to go a lot when he was a little 'un himself but hadn't been for years and we as a couple haven't been for 10 years and personally I feel it's in dire need of an update, but Emily really enjoyed herself and that's the main thing. 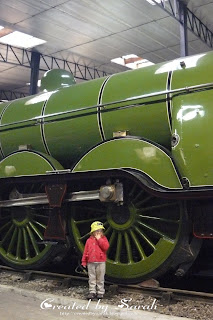 Then the beach on Sunday - with her new kite, which she wasn't interested in at all but Mummy really enjoyed flying!  I don't remember having a kite as a child, so this was a totally new experience for me and quite addictive! 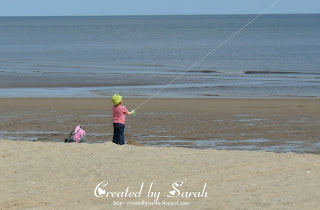 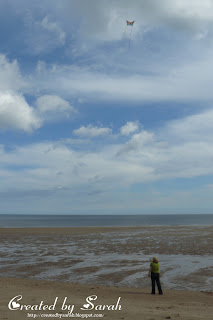 No pictures of Crich yet, will maybe load a couple of those later in the week.

Tomorrow Em and I are off swimming, then she's getting a haircut and Friday its a kids group in the morning and work in the afternoon.  Hopefully I'll get some time to make cards tomorrow evening and will have cards to load by the end of the week, until then I'll love ya and leave ya!

Email ThisBlogThis!Share to TwitterShare to FacebookShare to Pinterest
Labels: holiday

Hi Sarah,sounds like you are having a great holiday,fabulous photos.
Wendy xx

fab photos sarah,looks like you all had a great time. sue xx