So what's your favourite?

This is the first of two posts for me today - and then you won't hear anything for awhile as I don't have any DT commitments and we've got my Father-in-Law staying for a week, so will be on the busy side.

So first up it's time for a new challenge over at The Cutie Pies and the theme, as you may have gathered, is 'your favourite film', as always with a cute twist.

Our sponsor is, with a fab prize, is:

Now I do like a good film, but the ones that I would pick don't really have a cute theme as I tend to go for Sci-fi or fantasy - with the occasional action adventure thrown in.  I do have a very large soft spot for the original Disney films though, so my film is 'Sleeping Beauty'.

I was still feeling rough when I made this card - so I used a pre-coloured topper.  That, however, made me feel a bit guilty, so I chucked everything but the kitchen sink at it!!! 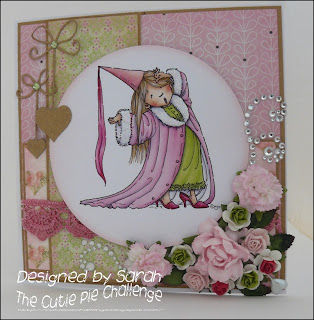 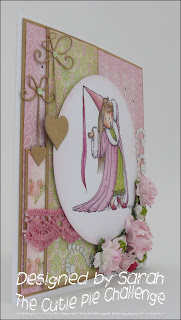 So I hope you find a chance to pop over and join in - you'll love what my teamies have created.

See you in an hour!

Email ThisBlogThis!Share to TwitterShare to FacebookShare to Pinterest
Labels: The Cutie Pies

stunning sarah!! what a sweet image...such beautiful colours and the flowers are lovely :)

Chucking the kitchen sink at it might have been a tad over the top cos you might have ended up watering it down.!!!!!!! Super little card by the way.
p.s. You waffle and I'll read. thats the deal. hugs mrs A.

this is fabulous sarah.love all the pretty details and gorgeous image :D

Gorgeous card Sarah, love the image and all your pretty flowers.
Wendy xx

It's gorgeous Sarah, we all have those ill/upset/whatever moments in our lives and given you've been so ill I hope they thanked you - really beautiful embellishments though! Karen x

This is lovely Sarah she is one of my fave Mos images and such a sweet card! Hugs Rebekah xx