Less is More - a touch of red

Well here I am entering the Less is More challenge again!  First off I wanted to say thank you to everyone who left comments on my cards last week.  You have no idea how much it boosts my confidence that you all were so kind and complimentary about my cards - especially as you all make such stunning cards yourselves.

So this week, a touch of red, I was thinking about this on and off all Saturday.  I tend to go for character stamps these days and I couldn't think of many of them that I thought would look good with just red, the only one that I thought might work had already been used.  So back to the drawing board and my older stamps.  I had a root around my, many!, boxes of stamps and found a couple that I thought would work.

Again being Sarah, I ended up making two cards.  I couldn't decide which I liked best, so here are my two attempts.  I still have the option of the other stamp and I may be back later in the week with more.

So my first card I stuck to my standard square, stamped the image in the corner, the sentiment on the opposite side and drew a black line around the card.  The red ribbon was coloured with my pencils and glittered with Martha Stewart Glitter.  I was a bit nervous of leaving the image with no colour and so very lightly highlighted it with grey pencil. 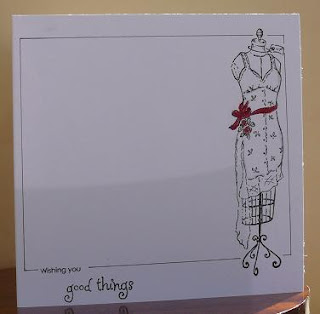 On my second card I used the DL size again, I almost always used to make this size card when first starting out, and it was nice to be reminded of it in last weeks challenge.  This time I stamped the image on a separate piece of card, matted it with black paper and then mounted it on the card blank.  Stamped the sentiment in the top left, coloured the ribbon with pencils again, but this time I used Stickles glitter to highlight.  I was braver as well and left the image uncoloured. 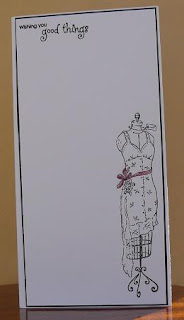 I think this shows me two things.  One I need more sentiment stamps, I know a lot of people computer generate their sentiments, but I just love stamping.  Two, it doesn't matter how hard I try I cannot get a straight edge!  I wonder if it's something about being left-handed.

Finally I noticed after I took the pictures that one of the edges of my cards is a bit feathered, it's time to change my trimmers' blade I think.  I am looking at changing over to a guillotine, an X-cut has been suggested by friends on Do-crafts forum - any other suggestions anyone?

I'm with you hon . . . a stamper not a printer . . . I just can't be doin with all the faffing about with placement, plus me and my printer are NOT friends really! I take my hat off to those who CAN do it though!

Both your cards are terrifice LOVE that image . . . but I'm favouring the first (square) one.
Hugs, Sandra

Hi Sarah
What a fabulous stamp, stunning cards
I think Id choose the first Love the hint of colour...perfect
I use an X Cut guillotine, I find it the sharpest and crispest [is that a word?] trimmer
Thanks for your entry
mandi
"Less is More"

2 good cards....have you thought of doing the first design on a DL?

Jut love your card its so stylish...

I think the placement on the second one is slightly better but I'm new to this game so what do I know really?

I love the stamp - I think both cards are very stylish, but a personal preference is the square one. I like the way the image and sentiment move into the square outline. I have just an ordinary rotary blade guillotine - and I think its fine. It's just getting used to the lining up and where your blade cuts. x

Like my friend Mandi, I have an X Cut guillotine too and it works really well, but I don't know if you could use it as easily being left handed. I think you'd just have to develop a right-handed technique for using one! The pressure bar needs to be held down carefully to ensure a precise cut.
Your cards are great and I think I prefer the first one of the two.
It's super that you are trying different things for each challenge!
Enjoy your week.
Chrissie
"Less is More"

Absolutely gorgeous! I think the first is my favourite. I know what you mean about stamping/ printing sentiments. I find stamps so much easier!

Great cards Sarah, love the image you've used. (I prefer the first one - but both fab) x

Great cards! I prefere the first one a lightly better.

This is a very stylish card and nice to see something a bit different. Jo x

Faith A at Daffodil Cards said...

Love these cards, but have to go for the first one, maybe it's the border?, but love both

Great cards Sarah. Love the image - it's very stylish and the splash of red is very effective :o) Lisa x

Sarah....it's a great image and you've created two beautiful cards...but, if I "had" to make a choice...I love the layout of the first card...the line around the image really grounds it.

Hi Sarah, i am left handed and use a Purple Cow guillotine and rotary blade cutter (it's an all in one)and have no problem with it at all. I like it because you can keep the card in place when cutting so you don't get wonky edges...

Two very elegant and classy cards this week. Loving how you have added a touch of red it is very effective. These are two of my favourites from this weeks challenge:-)

Love your square card. Looks great with just the touch of red. x

Hi Sarah - Sarah again....lovely card - you've delivered a great second week. So glad you are diving in - best way to learn and discover! Will be posting mine soon - still drying!!!

Two lovely cards, you are really good at this :O) Viv xx

SImple and elegant. think I prefer the layout on the first on

So beautiful and stylish!

I love that stamp and if I really have to choose I prefer the first card. I think it is the way you position the border.
I will have to give Less is more challenge a go. Making clean and simple card is surely a challenge for me. It is one of those things that I am not very good at!! ^_^

Lovely cards, I think I prefer the shape and design of the first card. I think a guillotine is best as long as you remember you need all your fingers to craft with. lol
I have a rotary trimmer and I'm not happy with it, thinking about changing to a guillotine too.
Jennie X

Absolutely love that image, which lends itself to a touch of colour beautifully. I love my Fiskars trimmer - I'm short on space and because I have a scoring blade as well as a cutting blade on it, it works hard! The blades are so easy to change too - just pop them in and out.

I think I prefer the square one, I love that image, what is it?
x

Thanks for letting me know the details of the stamp Sarah, Donna x

i love the way you've drawn the line around the card. it's so stylish!
love it!
kathleen mc xx

ps have a look at the Fiskars sets of sentiment stamps. they ae on a huge sheet (about 8" square) and have loads of sentiments on them. there are quite a few sets too - friendship, wish etc. think i got mine for £14 at the SY show in lincoln last yr from the oyster stamps stand so have a look out for them again!
Kathleen Mc xx