I nearly didn't do a card for this weeks Less is More - I really got stuck with the monochrome theme just couldn't think of what to do at all. Which is why this is such a late entry - I'm also rather busy at home at the moment there seems to be a sudden glut of cards needed and it's coming up to my daughters fourth birthday so lots going on.

I have finally come up with two cards.  One is taking inspiration from Chrissie's card  and the other from something I saw in an issue of Craft Stamper.  I have started buying these magazines again after about a 6 year break from them.  They were, I felt, too 'arty' for me at the time, but I'm feeling the need to be able to do something other than patterned papers and stamp an image, colour it in - so thought I'd try again.

Here are my cards: 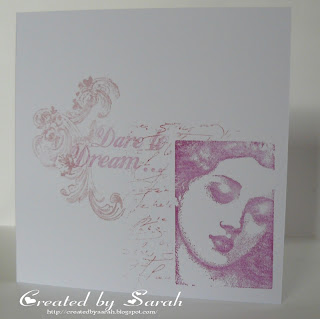 This one is using a variety of stamps.  The main image is a Rubber Stampede stamp 'Woman in Repose' (I've had it for years - obviously I must have started out with an idea of using 'arty' stamps!); text is "I AM" script again; sentiment and flourish are both from TPC studio Boho Blooms.  They were stamped using a Color Box Chalk cats eyes stack of pads. 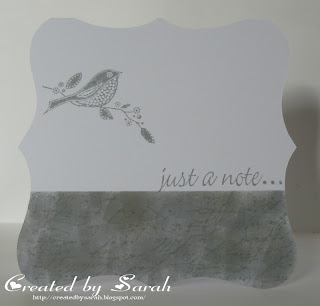 This is the one that was inspired by Chrissie's example.  I masked off the bottom of a Craftwork Cards card blank and sponged on ink from a  Memento London Fog pad.  Then stamped the same script stamp over the top.  The bird is from, I think, an Inkadinkado set - another case of chucking the packaging.  The sentiment I picked up for a pound from the Lincoln Fair I went to recently and is an Anita's stamp. I used the London Fog pad on all the stamps.

I don't know that either of them are very good, it just didn't seem to work this week, but as I've said before I'll keeping trying and maybe one day I'll get the knack!

Sorry for minimal commenting two weeks in a row now,  I will try harder next week - promise!

Sarah, both cards are lovely! I don't think I've ever tried monochrome cards. I wouldn't know where to start! I really love that 'Woman in Repose' stamp. She looks so pretty! Julie x

both these cards are just simply stuuning and very elegant!!
vanessa xx

Both cards are beautiful but I love the first one.

These are super Sarah. Love your subtle colouring.
I used to buy CS to, but, not done for years either! I find them to arty farty for me to lol
Thank you very much
Diva LIM mandi
"Less is More"

I feel so flattered that something I did was inspirational for you Sarah... make me feel very special!
Thanks so much for these fabby submissions, I really like the first one actually!
Chrissie
Lady LIM
"Less is More"

Greatcards , I love the first one.. the female image is beautiful.
Sue :)

Beautiful cards Sarah,hope you have a lovely weekend.
Wendy xx

Two lovely cards! Love the colors you chose, too!
Susan@Keeping in Touch

Wow! I think you've done a great job Sarah, I'm always doing that, looking for a challenge, then can't find one I want to do, then finding one but then can't think of WHAT to do, then beating myself up because i wanted to do one, after all it's a challenge, right? And as you can see, I can waffle too! Thanks for your lovely comment on my blog. Love, Clare x

Great cards! I think I like the first one best. Such a pretty pink.

Both cards are absolutely stunning...love em :D
hugs and xxxx