Nothing for hours and then three turn up at once.

I'm talking about my cards - although you've missed the buses this time, I made these cards for last week and am only posting them here now.  I'm feeling a bit guilty that I've ignored dear bloggy again and for, oh no! real life so thought I'd best share something!!!

You have to imagine me chained to the kitchen sink (or hob in reality) making loads and loads of Plum chutney, Plum jam, Plum conserve and anything else you can think of Plum related - before the blooming things go furry and only the wasps want them!  I've got one more tray to get through and then about a dozen trays of apples plus more on the tree, plus all these runner beans to freeze as well.

We even got an extra freezer to cope with them all - can you believe it got delivered on our wedding anniversary and Peter said it's a present for you!  I responded by going out for an evening meal with some of my friends!!  Sounds terrible I know, but none of it was meant and it's how we deal with each other.

I think I shocked one of my friends once by telling her that I'll enjoy my early widowhood as Peter is nearly 10 years older than me so he'll be going first!  It isn't meant and he knows it!  Anyway after 13 years I think we are allowed a little leeway with the humour.

Anyway onto my cards these were made for Emilys' friends who started at the same school on the same day.  Ryan is her best friend, Skyla we met through Ryan's mum and Jessica we met at Nursery.

So here are pictures: 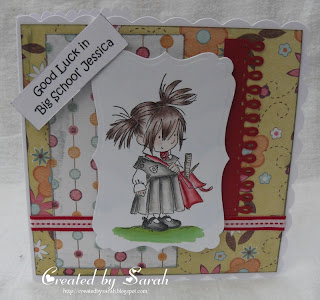 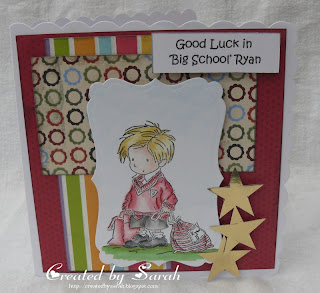 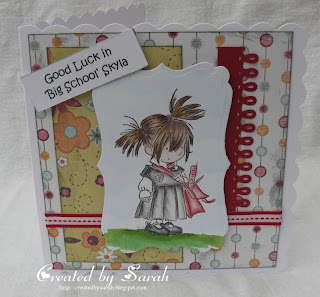 I'm sure I followed sketches when I made these cards, I probably even meant to enter them into challenges but I never made it that far.  So, once again, they are just being shared for the sake of sharing.

All the images are Lili of the Valley and coloured with Prismas.
Die-cute with my Go-Kreate dies and a Martha Stewart punch for the loops, the stars were handcut.
The papers on the girls cards, I got as a birthday present and, I think, are called Sugar and Spice.
I used scraps on the boys card and, to be honest, haven't got a clue whose they are!
Ribbon from one of my boxes, sentiments computer generated.
Card blanks from Craftwork cards.

Thanks for reading and am off to have a little wander around blogland, before beddie-byes.

Email ThisBlogThis!Share to TwitterShare to FacebookShare to Pinterest
Labels: Lili of the Valley

What adorable cards Sarah they are all so sweet! I love the sound of all that plumness though you are prob sick to death of it now hugs Rebekah xx

Great cards, I really love your colouring. I may have to give Prismas a try. xx

these are stunning sarah.gorgeous images and i love your papers and designs :D
i know what you mean about the humour, my hubby is 6 years older than me, the old fart :D

Hi Sarah
I hope you are well. My new work is taking up all of my time at the moment and I love it, but I am missing my crafting and blogging buddies.
I love these cards. The images are gorgeous and your designs are beautiful.
Thanks for staying in touch and take care.
luv and hugs {brenda} xoxox

a lovely set of adorable cards, so cute. xx

these are sooo cute and a great idea for those staring school :)