My goodness how long has it been!!

Huge apologies for the long absence - it's just been such a hectic week that I haven't had time to blog at all.  Not that I've been being lazy though - 53 Christmas cards made, not bad for a week's work!

And it's one of those cards that I'm using today for the new challenge at Sweet Stampin.  This week we're feeling all festive as Santa's on his way to visit us!  Seriously though this means we'd like to see anything with a Santa on your project, as well as stamping (the clue is in the title!).

This weeks sponsor is giving one lucky winner a $12 certificate :

And one lucky winner will get a £10 voucher from our regular monthly sponsor:

Now then, I have a slight problem with Santa - I don't like him, well I don't actually know him personally to not like him!  What I mean is that I grew up not liking being made to go talk to Santa - I have lots of pictures of my bawling my eyes out standing next to man in red!!

So I have only the one image of Santa and it's been rather over used over the years, I was on the hunt for an alternative Santa - Abi (the boss lady!) was very kind and said that I could use the word 'Santa' but that didn't feel right.  Therefore, after a degree of hunting around on the internet I found this image and it's become one of my batch made Christmas cards. 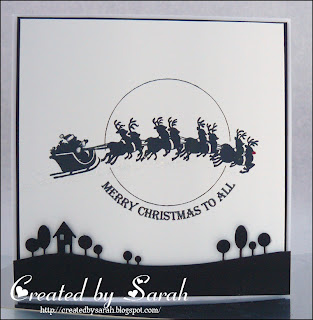 Can you spot Rudolph!! Hubby couldn't, but then he is getting very old (private joke there, which will be explained between Christmas and the New Year).

I'm just as busy next week, so again you might not see me very much but I will definitely be back mid-week.

Cheerio for now,
Sarah
Posted by Unknown at 08:00

I've seen this stamp twice this week - its so ..well Christmassy - I love it - just makes me feel like Santas on his way! Merry christmas if I don't call again before the big day - there's none of us knows what sides up at the minute I think!! hugs Judith x

Love this Sarah. It's gorgeous.

This is gorgeous Sarah. I love the image and the layout is fabulous

I hope you have a good week, even if it is a bit busy!

Love this Sarah, such a great image and fab design - the die cut works so well :o) Hugs, Lisa x

an absolute visual stunner - beautiful. congrats on your news too x

Beautiful! I love your design and the scene you created. Best of all its a gorgeous Christmas card with out a lick of red or green. I love it!

Beautiful card Sarah, great design and of course I spotted Rudolph its the first thing I looked for. Congrats on your DT post too. Debs xx

This is just super fantastic Sarah and love the sillouette image. Layout is fantastic. hope little one is enjoying herself at the moment and your keeping rested!!!(LOL)
x catherine

Gorgeous creation,
Thanks for your comment on my blog.
Hugs Tamara