Not the best of weeks so far!   After all the fuss about Emily going to big school, she's made one week and then come down with Chicken Pox - so no school for her! Hopefully she will be back there next week.  It does mean that, once again, my crafting time is almost non-existent.  Thankfully she has very few spots and is feeling fine, but that's almost what makes her being off so odd.  I could understand if she was feeling ill, but she isn't she is as bouncy as she always is - it's probably me that's going to go a bit stir-crazy being stuck inside.

So I will blog as much as I can, but it won't be as regular as I would hope and, again, I'm missing challenges that I would like to join in with - bah!!

So that's the end of my whinging and onto the one card I've managed to make this week which I had meant to enter into the Totally Gorjuss challenge, but I've just gone over there and I've missed it - again! Double bah!! 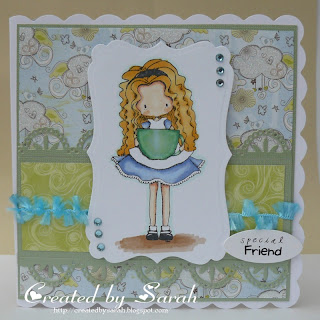 The image is a Stampin Bella - Christy Croll stamp : Alice coloured with my promarkers (I'm not too impressed with what I managed on the face, but I think the rest isn't too bad).
Die-cut onto Go-Kreate die.
Papers are First Edition - Up, Up and Away paper pad.
Gems and bit of fluff - from my stuff.
Card blank and sentiment from Craftwork cards.

So I'm not sure when I'll be logging on again this week - hopefully I'll get some time to make a card this week!  Otherwise I will try at the weekend.

I'm going to join in with Make it Monday again this week - so enjoyed looking all the entries last week!

Oh No Sarah! Caleb had chicken pox in his last few wks of nursery so we got that out the way back then but a friend of mine said yesterday her son only had 1 day of reception and was then off with chicken pox too! I love these tiddly images she is so sweet I must get these out again, great colours, hope you find a little time to yourself soon and I hope she doesn't get too many spots Caleb had them absolutely everywhere! Hugs Rebekah xx

Such a gorgeous card Sarah, love the image and fabulous colouring.
Hope Emily gets better very soon and thank you so much for the lovely comments.
Hugs Emma x

I am playing catch up in blog land at the mo, I have enjoyed having a good nosey round your blog, to check out everything I have missed, as always, such inspirational work!!

Love this card, fabby colouring and i adore your combo of DP's!!

stunning card sarah,the image is gorgeous and i love your colours.
aw poor emily, i hope her spots scab over soon so she can go back to school :D

Hello Sarah . Hope your poor little mite recovers quickly .
Love the papers and layout that this cute image is layered on .thanks for sharing on Make it Monday .
When commenting on another’s MIM entry don’t forget to mention that you saw it on MIM and the more entries you comment on in this way, the more chances you have of winning.
Shirley-Anne

Hi Sarah! I'm back (not sure how long it will last, am off sick with a slipped disc OUCH!!). Poor Emily, hope she gets better soon. Your card is fab, I love the papers especially. xx

LOVE your card, I think it's gorgeous! Fab image and you've coloured it beautifully, great colours too :o) Lisa x

Oh no Sarah,sorry to hear about Emily and just when she starts school,but saying that at least she will get it out of the way while she is young,hope she gets better very soon.