Hope y'all have had good weeks, we've had a very productive one.  Not cards at all, I've been terribly remiss with those, but on the D.I.Y. front it's been a good week.

We might be having a day off today, but you never know as the skirting board is calling.  But that's only if hubby wakes up soon (he's napping on the sofa - one of trials of getting old it would seem is being tired when you are doing a lot of decorating!).

I thought I'd do my now semi-regular Sunday update on SWMbO's new bedroom.

So here come the piccies: 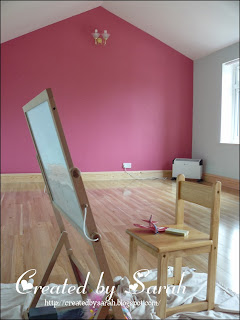 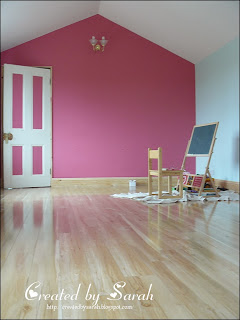 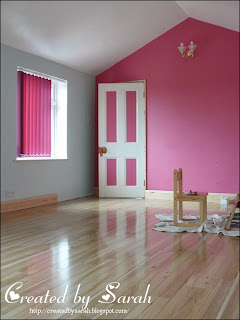 You can see she's already starting to move in - even tho there is no radiator yet and there are things to be finished off!!  I think if we don't hurry up we will find her bed in there one morning!!!

Hope everyone else is well.  I can't even say see you with cards next week, as I'm soooo behind with those it's unreal, but hopefully now we are on to the finishing touches I'll be back to normal in a couple of weeks.  Tho when have I've ever been normal - hmmmmm, never????

PS - Although you will spot the lighting, it's not what I really wanted.  You may recall that I put out a plea for advice?  Well hubby persuaded me to go with what we've got to get SWMbO moved in, he said we can 'tart it up' later.  It certainly does need tarting up as far as I'm concerned!!!!  The two lights do give enough light, but the light fittings are just not right for that room.
Posted by Unknown at 11:40

Fabulous fabulous colour Sarah. I am off to make a card using wood tones and hot pink. Ta heaps for the inspiration. :)

Great progress Sarah. You are dead right about the men snoozing when there's tons to do...still us girlies do a far better job in my opinion!! Bless her heart for wanting to move in, can't say I blame her! xx

Looking good, so love the colour and that beautiful shiny wooden floor. Who wouldn't want to move in? Jx

oooh Sarah, what a pretty pink - proper little girls room colour, and I love the flooring too!

Love this, the pink is amazing!!! Fully know how u feel with the decorating ... We building an extension at the mo. Hugs Juls x

Looks fantastic...when can I move in?!
Sarah-Jane xx

Looks gorgeous Sarah best hurry though before that bed moves in, though how you can stand the upheaval of all that building work I don't know we only had one week of disruption and that was bad enough. Hope you have had a good weekend. Love Alison xx

Great progress, Sarah! Love the candy pink with the pale aqua - great choice by SWMBO! It's really starting to look like a proper bedroom now and I bet she can't wait to move in there!
I've spent today doing a bit of shopping in Dunelm, getting more bits and pieces - storage boxes, lamps, cups, pretty towels for the bathroom, etc and hope to spend next week starting on our bedroom, beginning with the ceiling!(Hope it doesn't take as many coats as yours did!) Our schedule for next week is supposed to be, removal of the old floor tiles in the kitchen and screeding, floor laying in the bathroom, finishing grouting and then the kitchen floor laid on Tuesday...fingers crossed! After that, it should just be a case of taking out the old fireplace and pipework and fitting the new fire suite and I'll be able to decorate everywhere then! It can't come quick enough for me to get my house back! Have a great week! Hugs, Lisa x

Lovely shade of pink. Need the same colour paper for my card! ^_^

Wow this is coming on leaps and bounds!! Love that colour and the matching blinds are fabulous!! Might want to move in there myself!! Too cute that some furniture has found it's way in there already!!
Hugs Laurie xx

Love that pink! Great shade! No wonder she's trying to move in already (I would). Looks fab!

wow its looking fabulous sarah.no swmbo wants to get in there.i love the shade of pink :D