my Emily and her new friend Jade.

So when I saw Krista the creator of Saturated Canary digis / Simply Sassy stamps and Saturated Canary blog challenge was organising a card swap for the little 'uns, I thought I know who would like that!  And that would be - my Emily, I was right (for once, as at the moment she is going through a 'my mummy is a wrong 'un' stage and only Daddy can do right.  I'll tell you about the kneeing me and the not beautiful shoes another day!).

Krista had asked to be emailed with the child's details and she would organise swap partners.  So off popped Emily's details and we were paired up with Jade and her mum Katya - who live in America!!  Firstly it took some explaining to Emily (who is 4 and 3/4s!! as she is telling everyone) where America is, the Atlas was dug out from it's lonely corner of the kitchen, dusted off and then England was pointed out and America was pointed out and the big blue pond in the middle was pointed out!

Emily dealt with this concept of an ocean and the distances involved by latching onto the fact that we are on an island so Jade must live on her own island!  I don't think that Jade and Katya realised just how close they came to having an Emily invade - we had to spend another chunk of time explaining to Emily that it was a bit difficult going to visit them as they are very far away.  'What even further than grandad?  Could I go on a train - or an aeroplane?  Oh, an aeroplane, ooooohh  - can I go now'!!!

So we eventually got round to the idea of making and sending a card which we did, but then there was a great deal of disappointment (on both sides I understand) when the card didn't arrive.  We worked out what had gone wrong and duly created another card to send.  With Emily practising her writing in it - a big thing at home right now! In the meantime Emily's card from Jade had arrived and it had stickers in it!!!  A big plus point for Em - she does like her stickers!

So I show below the card that did make it to Jade and a picture of Jade's card to Emily:
Oh and I know they all have my watermark on, but that's an automatic thing I do with blog cards - so please excuse and ignore! 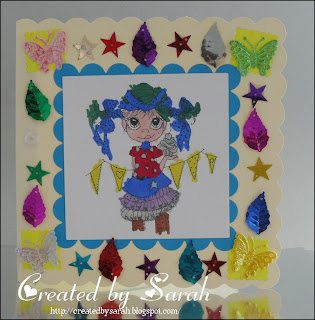 Emily showing off her card (excuse dirty windows, have I told you I'm a terrible housekeeper?) 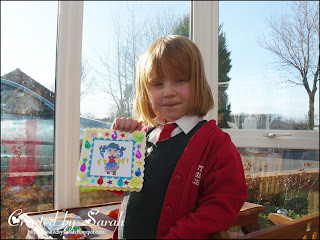 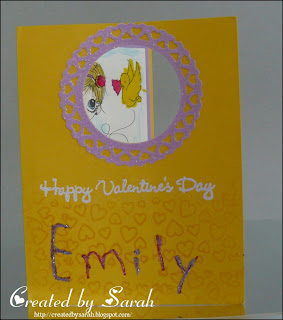 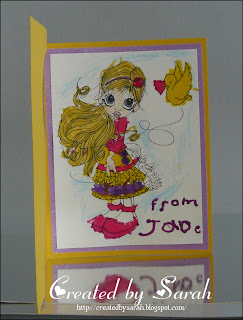 This has been a great experience for Emily and I'm so pleased that Krista put herself up for organising something that must've taken up a lot of her time.  Emily is quite determined that she is going to visit Jade one day and that she is going to make her another card.  What a lovely memory this is going to be for her.  The time she made a card for Jade who lives on Jade's island!!

What a sweet story!

Wow this is fab sweetie she looks like she loved it! Hugs Rebekah xx

Emily AND her card are gorgeous - and what a fab idea for the little ones!

Hi Sarah, Emily's card is FAB as is Jade's! My Rebecca joined the swap too and was paired with Krista's daughter, Niamh, she loved it!
Jo x

It's a scarf Sarah, she doesn't have a blue neck!!

Emily's card is fab. Love it.

And I never noticed any dirt on the windows!

Hi Sarah,
I like the way you wrote out the story in your blog. I wrote a post script from Jade on the blog (you probably didn't see right away since I showed it to her a little later and she wanted me to add something.)The post is just for Emily about "blue skin." I read your blog entry to Jade and your e-mail so she had a response to the blue neck. Enjoy.

Emily and Jade's cards are gorgeous, what a lovely idea for the little ones.
Wendy xx

Wow Sarah, their cards are gorgeous. Their coloring is amazing for being so young.

aw bless.this is so sweet emily.gorgeous bright colours and thats not a blue neck mummy, its a very stylish polo neck jumper :D

Hi Sarah. You have a very talented daughter. Well done. Please check my blog, I have nominated you for the green blend award. Thank you for nice comments on my blog and support. Have a nice day. Lily Anuska

awwww Emily looks so sweet and proud holding her gorgeous card! What a fab idea!
Just had a quick look around seems I've missed a bit on here over the last few days! Love your layers card
Laurie x

What a lovely story! Emily looks so pround of her card and her card is so bright and colourful. Love all the sequins around it. It is a great experience for the little ones to have a penpal!

What a great story Sarah! Also what a great idea, I bet the girls really enjoyed this. If you ever cross the pond to visit Jade swing by here to see me too!
Tell your daughter her coloring is excellent!

"blue neck" ?!! Mummy how you dont understand.. it is last fashion colour scart!!! )) lol
Beautiful cards!! You have to be very proud your daugther!!!
Hugs
Natali

Emily's card is gorgeous and love all the pretty colours.
luv
Debby